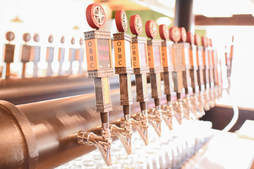 Our Head Brewer, Greg Tuhey, made the move to OBBC February 1 st , 2018. Prior to OBBC, Greg spent his previous three years honing his skills at the Auburn Alehouse while working under Brian Ford and Jennifer Talley. During his time at the Alehouse they took home three medals from the Great American Beer Festival, essentially the Olympics for brewers! Medals include: 2016 Bronze for English Brown Ale, 2017 Gold for Double Red Ale, and 2017 Silver for IPA during a record entry year in that category. Greg stated, “We had a really great team and I saw the opportunity to become a sponge that could absorb all of this knowledge and experience around me. I learned so much so fast! I will always be thankful for my time there.” Prior to the Auburn Alehouse, Greg worked for Crispin Cider Company in Colfax, CA for four years. He said, “When I first started there the company was relatively small but growing rapidly. I was able to get into the cellar making cider relatively quickly for a guy just starting out. Once Miller Coors took over in early 2012 the infrastructure and quality standards seemed to change overnight. I was really fortunate to be there at the time and learn the quality side from the big boys, helped me tremendously over the years.” Greg is a Nor Cal native, he lives in Colfax with his wife Marissa and their two children, little Greg and Elliana. He likes to ride snowmobiles, motocross, go fishing, and make great beer. Greg said “I love the people we have here at OBBC, my team in the back is killing it daily! I wouldn’t have it any other way. We can joke, get serious, work hard, and focus on the things that are important to us.”
Both locations always have 12 Beers on tap! AIR CONDITIONED for your tasting pleasure! Come have a taster, pint, flight, or take some of our packaged beer options to go!

To meet our Brew Crew, click on one of their glorious photos! Mike "Mena" has been at OBBC from the beginning! He started here as a bartender, but was no stranger to the brewhouse. You would be hard pressed to find a more likeable guy, we are thrilled to have him as a part of the "Brew Crew". Working his way up, he is now one of our Brewers and we couldn't be prouder! He frequents the taproom here in Rocklin, say hello, he's always down to share some OBBC tales with you! Here is one of our newest brewers to join the OBBC crew, Rico Sanchez. He made the move to CA in 2013 and for 2 years made cider for Miller Coors/Crispin cider alongside with... you guessed it, our Head Brewer, Greg Tuhey. In 2015 Rico accepted a Brewer & Bottling Operation position with Red Lodge Ales Brewing in Red Lodge, MT. During his time there they took home a gold medal from GABF for their Chezc Pilsner. In Summer 2016 Rico accepted a position as a Brewer with one of the central coast family owned breweries, Barrel House Brewing Co in Paso Robles, CA. In the Fall of 2018 he started as a Brewer with a well-known brewery, Lost Coast Brewing. And finally, in the Summer of 2020, Rico made his way to us here at OBBC and was offered the position by our Head Brewer himself, Greg Tuhey. Rico has been with us for a year now, and we couldn't be happier! Rico was born and raised in Lampasas, TX. When you don't see Rico at the Brewery, you will most likely see him skating around Rocklin, working on vehicles, or being lazy in his hammock at home. Favorite Brews: Happy Pils Pilsner and OGP Pale Ale. Meet the newest member to the OBBC team, Steven Hermanson! he joined our team in the Spring of 2021 and has since jumped right into all delivery driver responsibilities! You can find him wrangling kegs in Folsom or helping the guys with whatever they need in the brewhouse in Rocklin. He is another vital part of our brewery and we are happy to have him! Welcome to the team, Steven!